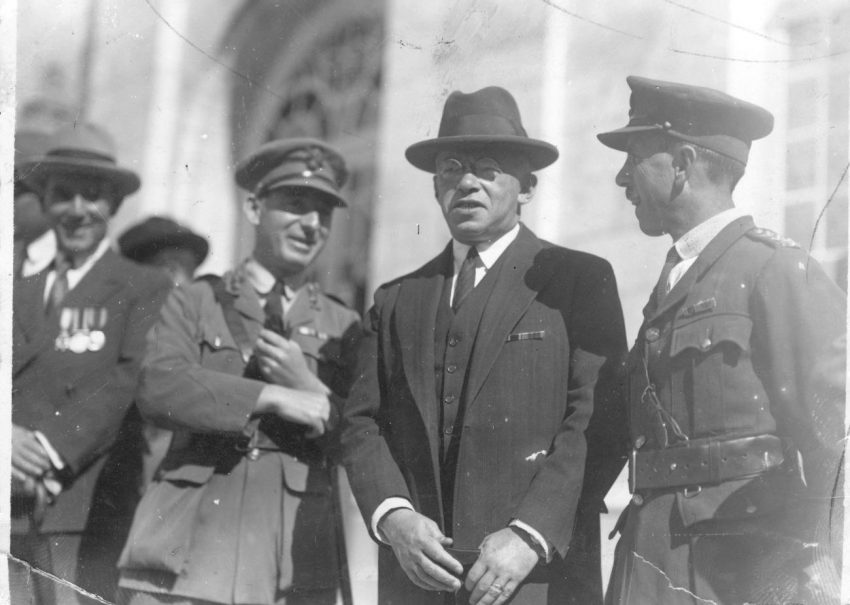 On August 4, 1940, Vladimir “Ze’ev” Jabotinsky died at a Betar camp in Hunter, New York of a massive heart attack.

I once saw a picture of the contents in his pocket at the time of his death – five dollars, a comb and a few  other items.. Someone diligent, prepared to go through the Jabotinsky Institute’s photo archive, can see what they were.  You would have thought Jabotinsky was a poor man. In fact, he was. He was never interested in material wealth.

Just before he died, he inspected a group of teens standing in single file.

Col. John Henry Patterson said, “Although suffering from acute pain, Jabotinsky carried out the inspection and went straight to his room and died – a martyr to duty even unto death. When I heard of it, I could not help saying to myself that if Jabotinsky were to choose the setting for his death, it would have been something after this manner.”

Col. Patterson led the Jewish Legion in World War I, the creation of which was Jabotinsky’s most concrete success. Jabotinsky produced so much in his life, though, that one could argue the point.  He founded the Revisionist movement, the aforementioned Betar, the Irgun, without which it’s unlikely there would be a Jewish State. But in terms of a success he lived to see and enjoy, then it would be the Jewish Legion, though that too crumbled before his eyes in the end. He was a tragic hero.

Jabotinsky was a great man. He had a rare combination of talent, intellect and character. As a politician, his policy prescription was tell the truth, indirectly pointing out how hard that is when courage is required to do so.

In 1922, for example, fed up with the Zionist leadership for failing to confront the policies of the British in Palestine, he said:

“This policy – to avoid straight talk with the government for fear they may have up their sleeve a ready and unpleasant reply, and at the same time, to tell the Jewish public that everything is in perfect order – this policy can no more be countenanced.”

Similarly, in 1931, Jabotinsky went to the 17th Zionist Congress where he proposed a resolution proclaiming a Jewish majority in Palestine as Zionism’s goal. It sounds innocuous today but Zionist leaders had retreated to the point that they denied they even wanted a majority, much less a state in Palestine.

In his speech to the Congress, Jabotinsky said “Truth has a purifying effect. Are we not all tired and are not all nauseated by the constant evasions? Clearing the atmosphere is a political imperative – and it will be achieved if we tell the truth. Why should we allow the term ‘Jewish State’ to be described as extremism? The Albanians have a state of their own, the Bulgarians have a state of their own; a state after all is a normal condition of every nation. If a Jewish State existed today nobody would say that this was not normal. And if we are aiming at normalization, is it permissible to say that this is extremism – and are we ourselves expected to say it?”

The resolution was shot down. Famously, he tore up his delegate’s card and shouted, “This is not a Zionist Congress!” He had to be ushered out as hostile delegates tried to attack him. Nothing inspires rage so much as someone else demonstrating the courage you yourself lack.

Jabotinsky was also honest in his approach to the Arabs, “The only way to reach an agreement [with the Arabs] is an iron wall – meaning a force in Eretz Yisrael which will not be shattered by any Arab influence.”

Jabotinsky never saw the Jewish State come into being. On the other hand, he was spared witnessing the Jewish people pass through the most terrible event in its long history. Still, one can’t help speculating what would have happened if he had lived another 10 years. He was only 60 when he died. Shmuel Katz, his biographer, said that if he had lived longer no one would have ever heard of David Ben-Gurion. That might be an exaggeration, given Ben Gurion’s grip on power in the Yishuv. But considering Jabotinsky’s popularity with the Jewish masses, it is reasonable to conjecture that he would have been a formidable rival.

At a special Knesset session in honor of the 80th anniversary of Jabotinsky’s passing (held on the Hebrew date), Speaker of the Knesset Yair Levin said, “In the first years of the state there were those who tried to diminish Jabotinsky’s contribution, to erase his doctrine and his great contribution to the revival of the nation of Israel in its land.”

“Those who belonged to the Revisionist movement were pushed away from the education system and public service. Jabotinsky, the history of the Revisionist movement and his spectacular achievements were removed from textbooks. His ideas and essays were removed from the world of Israeli literature and song, and, for years after his death, he was denied the right to be buried in the land to which he dedicated his life.”

The situation has changed. Jabotinsky is remembered in official ceremonies and he is often extolled by politicians, on both sides of the aisle. However, even as they extol him they have trouble emulating him. He wasn’t the kind of leader who comes along once a generation, but once in many generations.

Forget Seth Rogen, Save the Others