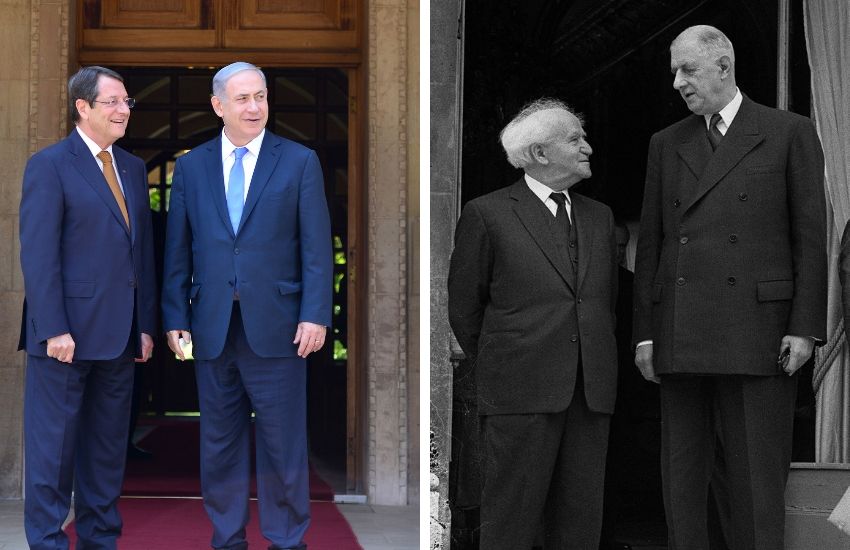 David Ben-Gurion, Israel’s first prime minister, served for roughly 13 1/2 years. It was a record that stood for 56 years until it was broken today, July 20, by current prime minister Benjamin Netanyahu. His 4,876 days in office is a milestone that has invited comparisons between the two leaders.

The two are heirs to very different political ideologies. Ben-Gurion was a socialist-Zionist. Socialism during Ben-Gurion’s youth was the default position of young Jews in Eastern Europe where he grew up. Netanyahu comes from a family of Revisionists. His father worked closely with Vladimir “Ze’ev” Jabotinsky, the founder of Revisionism and a bitter opponent of Ben-Gurion.

The most obvious difference is in the appearance and style of the two men. Ben-Gurion was diminutive and gruff. He talked in short, sharp sentences and never mastered English. Simply dressed and rarely seen in a tie, he sported the look of a small farmer. His appearance reflected his Labor-Zionist roots, which stressed manual labor as the highest value.

Though it appeared unkempt, Israel’s first prime minister was quite attentive to that white halo of hair. It became his signature look. (It didn’t hurt either that it made him resemble Einstein.) T-shirts are sold in Tel Aviv with images of just his ring of hair; it’s enough to let people know who it’s supposed to be.

Netanyahu’s style, on the other hand, tends to the traditional, suited politician. He is polished, well-spoken, a product of the media age. He has mastered the art of appearing on TV. They say Netanyahu switches on when cameras are around and, whether true or not, it’s difficult to think of an instance when a camera caught him in an ‘off’ moment.

Ben-Gurion joined Poalei Zion (“The Workers of Zion”) a Labor-Zionist party when he was still a teen. In Palestine, he was appointed head of the party’s central committee. He built the Histadrut, a trade union which grew to be a state within a state. The State of Israel is still struggling to free itself of the unfortunate inheritance of regulatory and bureaucratic burdens common to socialist economies.

Today, Netanyahu stands at the head of this effort. In 2004, he began to free Israel’s economy. He came up with the famous “fat man-thin man” analogy. The fat man, the public sector, sat on the shoulders of the thin man (the private sector) who was forced to carry him around. The comparison struck a chord with Israelis as Netanyahu also likened it to the Israeli Army exercise of carrying a fellow soldier, an experience most could relate to.

Netanyahu referred to his economic efforts recently in an interview with Israel Hayom. He said, “When I entered my prime minister’s position, an Israeli citizen couldn’t leave with more than $1,000 or $2,000 dollars. They’d need special approval from the Bank of Israel. Can the Startup Nation work like that? I freed up the currency. I took care of the deficits, and not by printing money but by setting priorities.”

Ben-Gurion was strong on defense. He led the country as Defense Minister in the War of Independence, and considering he didn’t have a military background, earns high marks. He saw early that the country would need to prepare for an attack by Arab armies, something which wasn’t evident even in Israel’s nascent military leadership at the time.

In 1945, he asked American-Jewish businessmen led by Rudolf Sonneborn to start sending military supplies to the Haganah, the precursor to Israel’s army.

In 1954, Ben-Gurion resigned as prime minister. But he returned in 1955, unhappy with the way his successor, Moshe Sharett, was handling defense issues. Ben-Gurion united the country under the Hebrew slogan Ein Breira, (“No choice”) meaning Israel has no alternative but forceful action against Arab foes.

That year he pushed for the development of Israel’s nuclear capability. In 1956, he green-lit the Sinai War in order to stop Egyptian incursions across the border, leading to a 10-year period of calm.

Netanyahu is sometimes called Mr. Defense. Even a Ha’aretz columnist who is no fan of the prime minister wrote on Friday, “The ultimate duty of an Israeli prime minister is to keep the country safe. And Netanyahu certainly deserves credit for that, being the prime minister with the lowest casualty rate for soldiers (and civilians in terror attacks).”

As Ben-Gurion was early in perceiving the coming threat from the surrounding Arab states, Netanyahu was one of the first to point out the threat from a nuclear Iran. “I saw in Iran a great danger and wrote about in ’79,” Netanyahu told Israel Hayom. Netanyahu continues to push forcefully on the issue. He was willing to buck the advice of IDF generals who said the Obama-sponsored nuclear deal wasn’t so bad.

Both Ben-Gurion and Netanyahu would defy naysayers on the big issues. In addition to ignoring those who said before the War of Independence that acquiring heavy weaponry was unnecessary, Ben-Gurion ordered Israel to bring in Jews from Arab countries against the wishes of virtually everyone. One of his biographers writes, Ben-Gurion “singlehandedly coerced Mapai, the Cabinet, and the Jewish Agency … to open the gates to mass immigration.”

Despite the economic hardships caused by the near doubling of the country’s population in a four-year period, history shows Ben-Gurion made the right call.

Ben-Gurion was  good at winning loyalty from future contenders for his job. When he left Mapai to form the breakaway Rafi Party, most of the young talent went with him.

Netanyahu doesn’t have this ability. He drives potential challengers away. The list is long. Some of them have formed their own parties, seeing no future for themselves in Likud as long as Netanyahu is at its head. Netanyahu said in the recent Israel Hayom interview that he wants to be part of building the next generation of leaders. But this is unlikely to happen given his track record.

Ben-Gurion may have been a secular Jew but he had a deep respect for Jewish tradition. As prime minister, he initiated a Bible study group. “I am not religious, nor were the majority of the early builders of Israel believers. Yet their passion for this land stemmed from the Book of Books … [The Bible is] the single most important book in my life,” Ben-Gurion said.

Netanyahu, also secular, sounds very similar when he talks about the Bible. In May, speaking at the International Bible Contest about Israel’s technological prowess, most recently in connection with its attempt to land a spacecraft on the moon, he said, “So one has to ask, how do we do it? It is thanks to our initiative, determination, daring and spirit. That spirit comes from the Bible.”

Netanyahu, it should be noted, revived Ben-Gurion’s tradition of Bible study at the prime minister’s residence.

Israeli Futurist's Warning Is Also Cause for Celebration

Jabotinsky: Remembered, But Not Well Enough