This June marks the 70th Anniversary of a dark chapter in Israel’s history — the Altalena Affair. Not surprisingly, Israelis are reluctant to give the painful incident much attention. Prime Minister Benjamin Netanyahu took part in a ceremony marking it on Wednesday, laying a wreath at the Altalena monument near the Tel Aviv beach. You would have to dig to page 17 to see a report about it in Israel’s daily Yediot Achronot.

The Altalena was the name of a ship obtained by the underground Irgun and filled with weapons donated by the French government and valued at 153 million francs. With the newly minted Israel Defense Forces desperately short of arms, these weapons should have been a godsend. As Netanyahu noted at Wednesday’s memorial, “If the weapons had arrived, it’s possible that the borders and complexion of the state would have been different in the first 19 years of our existence.”

Netanyahu likely was referring to the fact that Jewish fighters in Jerusalem were woefully ill-supplied with arms and ammunition. The Altalena’s weapons might have turned the tide, giving them the materiel needed to take the Old City and perhaps much more. Netanel Lorch, in The Edge of the Sword, writes: “‘An Arab Legion Officer, seeing the pitiful number of fighters and their meager equipment, exclaimed: ‘If we had known that this is what you fought with, we would have beaten you with sticks.'”

Needless to say, the weapons did not arrive.

Prime Minister David Ben-Gurion ordered the ship fired upon from shore. Off the Tel Aviv beach, the ship caught fire and the arms were lost. Sixteen Irgun fighters were killed and three IDF soldiers. Ben-Gurion claimed the ship was part of a putsch by Menachem Begin, the Irgun’s leader. There was no basis for this claim. Mr. Begin had in fact negotiated with Ben-Gurion’s representatives, informing them that the ship was coming. If Begin had been planning a putsch, he would not have told Ben-Gurion that a ship full of arms was on its way. 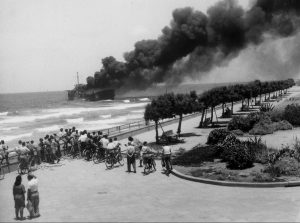 The Altalena burns off the coast of Tel Aviv. Credit: GPO

Begin would later say that Ben-Gurion attacked the ship in the hopes of killing him, a convenient way to get rid of a leadership rival. It’s impossible to dismiss the possibility. If you study Israel’s early history, there is evidence that Ben-Gurion had an almost pathological fear and hatred of the Irgun. One example, admittedly anecdotal, that has stuck in my mind is an official’s account of meeting with Ben-Gurion about another subject entirely and finding the future prime minister preoccupied, mumbling about how they must get rid of the Irgun.

Hero of the Affair

The hero of the Altalena Affair is Menachem Begin. Netanyahu noted Wednesday: “At this fateful moment we see the power and greatness of Menachem Begin as a leader. This greatness expressed itself in the wisdom of restraint that he demonstrated, preventing a far worse catastrophe. It is his words that are engraved on the face of this ship monument that we have set here: ‘Brothers at war — never.'” 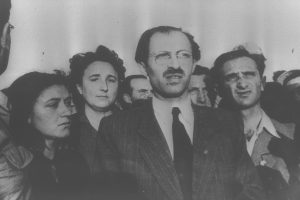 Summing up a Commentary article by Rabbi Meir Y. Soloveichik of Yeshiva University, Professor Jerold Auerbach of Wellesley College notes: “It was, Rabbi Soloveichik writes, Begin’s ‘greatest moment,’ a moment ‘that will ensure his immortality.’ Standing on the deck of the Altalena, ‘amid the hurling shells and dying comrades and followers yearning to return fire,’ Begin insisted, ‘in words that would define a nation, that Jews do not shoot at Jews.’ While describing Begin with compassionate wisdom, Rabbi Soloveichik virtually ignored Ben-Gurion, noting only that he ‘ordered the ship shelled.'”

Prof. Auerbach, incidentally, has written an excellent book on the Altalena Affair — Brothers at War: Israel and the Tragedy of the Altalena (2011). Succinct, carefully researched and compelling — it is easily the best choice for those looking to learn more about the Altalena Affair.