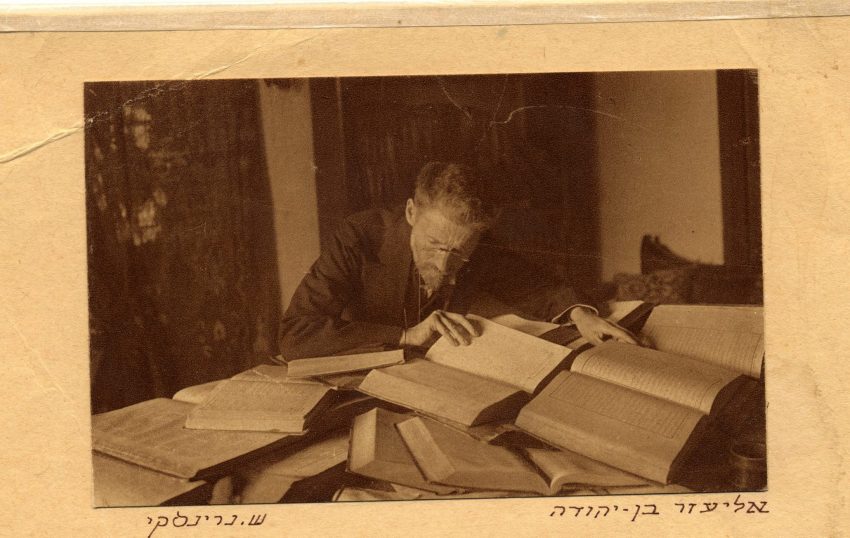 Thanks to our friends at Piece of History, we have a new figurine in our shop – Eliezer Ben-Yehuda. It’s all the excuse we need to talk about this remarkable Zionist, who was a peculiar combination of fragility and steel.

Ben-Yehuda is credited with reviving the Hebrew language. The credit is deserved. He did it through personal example, speaking to his son only in Hebrew. He said, “We feared the walls of our house, we feared the air in our room, lest the boy hear a foreign language.”

He must have been under tremendous pressure to stop the experiment. His son simply didn’t speak. His friends warned he would make the child mute with his fanaticism. But then, at the age of four the boy spoke a beautiful Hebrew.

It’s difficult to put ourselves in that moment but imagine if you will a language that hadn’t been spoken for 1,500 years suddenly flowing out of a young boy. The child himself became a symbol of Jewish revival.

It may be fair to call Ben-Yehuda fanatical in his pursuit of Hebrew, but fanaticism was the order of the day.

Few thought Hebrew could be revived. Even Theodor Herzl, for all his perceptiveness, said “We cannot converse with one another in Hebrew. Who amongst us has a sufficient acquaintance with Hebrew to ask for a railway ticket in that language? Such a thing cannot be done.”

The truth is that Hebrew was more living than dead even before Ben-Yehuda’s time. An excellent book by Lewis Glinert, The Story of Hebrew (Princeton University Press, 2016), shows convincingly that Jews made a conscious decision that if they were going to make it out of the Diaspora, their language was going to make it with them.

Ben-Yehuda stood on the shoulders of giants. Only he was a giant, too.

He suffered through tragedies that would have felled lesser men. Around 1880 in Paris, he was diagnosed with tuberculosis and was ordered to stop working immediately. He ignored his doctor’s advice and went to disease-ridden Palestine where he worked nonstop until his death in 1922.

It was his first wife, Deborah, who caught the disease from him and died in 1891 at the age of 37, leaving him alone with five young children. Within a year, a diptheria epidemic would take the lives of three of them.

Ben-Yehuda would marry Deborah’s younger sister, Paula, who would take the Hebrew name Hemda. It was in fact Deborah’s last wish that he should marry her sister, who would bear him an additional six children.

Hemda proved to be as helpful and supportive as Deborah.

His greatest project, “A Complete Dictionary of Ancient and Modern Hebrew,” eventually comprised 17 volumes. Six of them Ben-Yehuda completed in his lifetime.

Today, Glinert points out, an Israeli teen can read 3,000-year-old biblical prose with barely any help. No English speaker, or for that matter, European speaker, can say the same in respect to the language he currently speaks.

It’s amazing to think that there are now more Jewish Hebrew speakers in the Land of Israel today than there were in the time of Jesus, when Aramaic had largely replaced Hebrew as the common tongue.

Does anyone know the last word Ben-Yehuda worked on before he died? Send a note to contact@zionismu.com if you do. But only if you don’t need to look it up.