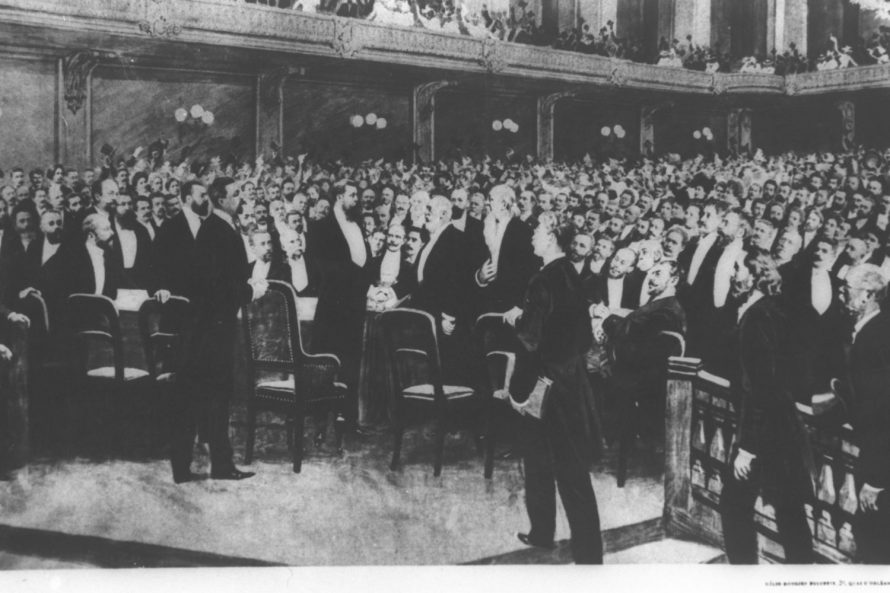 The First Zionist Congress, if it had been held this year, would have ended on Monday. It was held from August 29-31 in 1897. The idea was to create a political institution that would represent the Jewish people until they could establish a real parliament in their own state.

Zionism’s leader, Theodor Herzl, having come to the fore by virtue of having written a book, “The Jewish State,” at first resisted the idea. It was the failure of other projects that caused him to turn to the Zionist Congress. Ideas ground slowly in Herzl’s mind, but they came out exceedingly fine.

It was not a new idea. The notion of a Zionist Congress had been bandied about at least since 1893 by Zionist student circles in Vienna and Berlin and was taken up by other Zionist groups.

Herzl had been pushed by student groups to take the movement’s leadership, which he also resisted. At heart a writer, he resisted becoming a “man of action.”

Revealing just how much he thought of himself as a writer, when he was at a low point in 1896, with thoughts of death, he wrote: “I am conscious today, as I have always been, that I have used my pen like a man of honor. I have never sold my pen, never used it to mean ends, never even made it an instrument for the promotion of friendships. This last testament may be published.”

By 1897 something had changed. Herzl had adopted the Congress idea with fervor. “The Congress will take place!” became his slogan.

When Herzl decided on a course of action, he did it thoroughly and with remarkable focus. He once described himself as a laser – which surprised me because I wasn’t aware they knew about lasers back then. In organizing the Congress, he was both playwright and director, supervising every detail. The frustrations of dealing with delegates clearly tried his patience. He wrote in his diary: “The fact is that I have only an army of schnorrers. I stand at the head of a mass of youths, beggars and jackasses.”

The Congress opened on August 29, 1897. More than one delegate related that it seemed a change had come over Herzl. “It was as if the Messiah, son of David, confronted us,” said one.

The purpose of the Congress Herzl declared in the very first sentence of his opening speech: “We are here to lay the foundation stone of the house which is to shelter the Jewish nation.”

He said: “And finally, it is the duty of this Congress to see to it that when its sessions have come to an end, we do not relapse into our previous condition of disorganization. We must create here and now an organ, a permanent organ, which the Jewish people has lacked till now. … And our Congress shall endure far into the future, not only until the day when our need has been met, but far beyond – perhaps then more than ever.”

People often refer to Herzl’s remarkable prediction that people would understand that at the Zionist Congress he had created a Jewish State, if not in five years, than in fifty, and that, indeed, the Jewish state came into existence in fifty years. Fewer note that he also predicted above that the Congress would keep going, even after its mission had been met!
The 38th Zionist Congress will convene between Oct. 20-22. We can only wonder if Herzl had also predicted Zoom. I will check his diaries and report back.