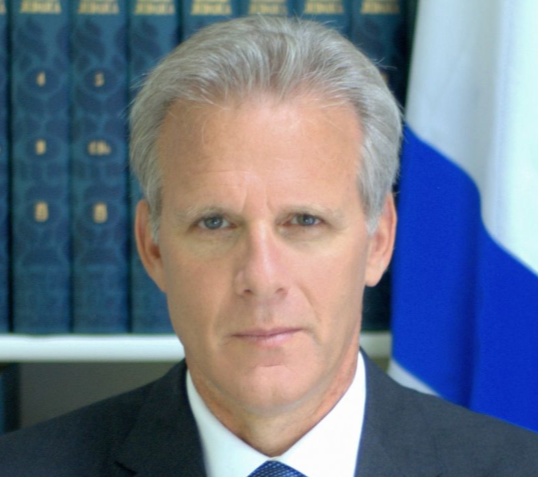 Israel’s former ambassador to the U.S. Michael Oren said that terrorists caught in the act should be shot dead. This is a surprisingly un-PC statement from Oren, whose history books are replete with political correctness.*

Oren tweeted on Dec. 27: “Soldiers who catch terrorists while carrying out attacks must be ordered to shoot to kill not neutralize.” 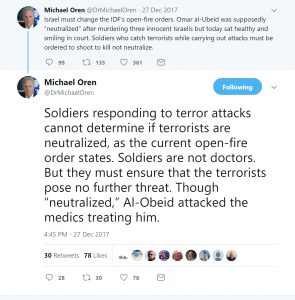 What sparked Oren’s remark? The image of grinning terrorist Omar al-Obeid in court. It was too much for him. In July, al-Obeid murdered three Israelis in the town of Halamish in the hills of Samaria. He was “neutralized” and then sprang up and attacked the medics treating him.

A Jewish Telegraphic Agency report says, “Oren’s position appears to contradict the IDF’s own code of ethics, which instructs soldiers to treat civilians with dignity and to ‘do all in their power to avoid causing harm to their lives, bodies, dignity and property.’”

The 1994 IDF code of ethics – “Spirit of the IDF” – was written by a four-man committee led by Asa Kasher, a philosophy professor at Tel Aviv University, who says terrorists should be treated like civilians. His code raised controversy at the time it was adopted. As former Israeli cabinet secretary Tzvi Hauser wrote in 1997, the “Spirit of the IDF” has not “a trace of either Jewish or Zionist content,” but is rather “a trophy for Post-Zionist ideology.” This is hardly surprising given that Kasher, in the words of Hauser, “is firmly on the extreme political left,” and on record as opposing the Law of Return for Jews to Israel, while supporting the Arab return to places like Jaffa.

The code includes a section on “purity of arms” which hearkens back to the policy of havlagah, or self-restraint, adopted by the Haganah under David Ben-Gurion. It meant Jews would only respond defensively to attack. Ben-Gurion felt the policy was necessary to ensure British goodwill. Berl Katznelson, a fellow labor leader, stressed its supposedly moral component. In the end, it was counterproductive on both counts. There’s nothing moral about letting yourself get murdered. And judging from British behavior toward the Jews, it won zero goodwill. Indeed, the British were amazed to watch the Jews lie down and take it from the Arabs. Even Chaim Weizmann, hardly a militant, criticized the policy in his memoirs as serving no useful purpose. Eventually the Haganah was forced to jettison it. As the Irgun commander David Raziel noted: “Such a method of defense, that allows the enemy to attack at will, to reorganize and attack again … ends in downfall and destruction. Whoever does not wish to be beaten has no choice but to attack.”

This self-destructive policy seems to have served as inspiration for Kasher’s code of ethics which the Israeli government at the time – the same government responsible for giving the arch-terrorist Yasser Arafat large swathes of Israeli territory – rushed to adopt. They could then pat themselves on the back for their heightened sense of “purity.”

Credit Oren for coming down on the right side of this issue. It’s time for a new code of ethics, one that replaces “purity of arms” with something more life-affirming like “the only good terrorist is a dead terrorist.”

*Although Oren can irritate with his frequent genuflecting to PC, this is not to say that his history books aren’t excellent. I particularly recommend Power, Faith and Fantasy: The United States in the Middle East, 1776 to 2006. New York: W.W. Norton & Co. (2007)