In Hollywood the saying goes that they don’t stab you in the back, they stab you in the front. Actress Natalie Portman raised that to a fine art last month when she announced her refusal to attend the ceremony for the Genesis Prize in Israel, which she had been awarded, pulling the stunt on Israel’s 70th Independence Day. It was such a spectacular front-stab that her name should become a metaphor for the idea – “I got Portman’d.”

Time Magazine calls the Genesis Prize the “Jewish Nobel.” Columnist Caroline Glick, in an excellent piece on the fiasco, writes, “The unstated but well-understood goal of the prize foundation, which is dominated by American Jews, is to convince Jewish celebrities identified with the left to support Israel publicly.”

Portman must have seemed like a godsend: Israeli-born with an impeccable liberal pedigree – among the causes she holds dear are gender equality, combating poverty, microfinance, and animal rights. Israeli billionaire Morris Kahn was so excited about Portman that he announced he would double the $1 million Genesis Prize.

Thankfully Portman will not be receiving the $2 million although apparently she will still receive the award. The reaction of the organizers has been to issue a mealy-mouthed press release in which they actually praise Portman.  Maybe they worry the more they express outrage the dumber they’ll look for picking her in the first place.

In their defense, what Portman did was outrageous, first leading them to believe she was honored by the award, stating back in November, “It is such a privilege to be counted among the outstanding Laureates whom I admire so much. I express my heartfelt gratitude to the Genesis Prize Foundation.”

Several have pointed to Portman’s “evolving” excuses for not attending. The original reason seems to have been events in Gaza. Portman’s representatives sent an email April 2 saying, “We have followed the recent news from Gaza with growing worry, and we are concerned that it is not appropriate to hold a ceremony given the government’s actions and the latest escalation.” Portman said the next day, “I chose not to attend because I did not want to appear as endorsing Benjamin Netanyahu, who was to be giving a speech at the ceremony.”

Netanyahu has been  prime minister for nine years. Portman should have been aware in November, when she expressed gratitude for the prize, that it would be Netanyahu who would give it to her. According to the Jewish Insider, “Genesis went out of its way to accommodate Portman’s concerns about Netanyahu by agreeing she didn’t have to sit next to him, didn’t have to have him present her with the award and was free to say anything from the lectern she wanted, including whatever critical comments she wanted to level at the current government. However, in the end she insisted Netanyahu not be invited to the event, a demand Genesis couldn’t accept both for contractual and moral reasons. A bridge too far.”

The Free Beacon found Portman’s behavior so irritating they even did a tongue-in-cheek piece suggesting supermodel Kate Upton replace Portman as a pro-Israel icon. Upton had posted around the same time as all this went down pictures of herself and her mom visiting the Holy Land. Upton expressed unqualified love for Israel. Even though she  visited the country for only three days and was likely there for a photoshoot, the Free Beacon argues she’d have made a  better choice than Portman, for all her professed love for the Jewish State.

The trouble with actors is they make a living playing people they’re not. And they can turn on the charm even when they appear in person. But sometimes small and, in this case, large, events slip through giving us an insight into their true character. And one thing is now clear about Natalie Portman. She is stunningly arrogant. She demanded that the democratically elected leader of a free country that she is visiting should be uninvited to an event. Exactly who does she think she is? Perhaps she is confused and thinks she really is Padme Queen of Naboo. I’ve forgotten who it was that said applause is the worst thing for a Jew. If so, the heavily petted Portman is the living embodiment of that truth.

The worst of it is that Portman has handed a victory to the BDS movement.  An article on their site is headlined Natalie Portman Rejects Israel Prize in Light of its Crimes in Gaza. Which actually is true. Gaza rioters held up signs thanking Portman, presumably between flying swastikas. If those people are thanking you, you’re doing something wrong. 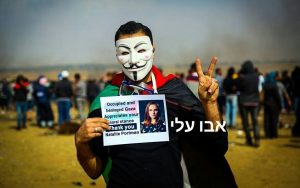 Portman made a choice. Caught between her liberal worldview and her Israeliness, she chose the former. She picked a side, and it wasn’t ours. If the Genesis Foundation is any guide, her calculus was correct. They praised her even as she flipped their award on its head, turning it from proof that liberal Jews support Israel to just the opposite. You’ve got to hand it to her. A good entertainer, she knows her audience. The left-wing Hollywood milieu in which she moves would have been far less forgiving had she gone to the event and been seen with Netanyahu. Ultimately, the side Natalie Portman really chose was that of Natalie Portman. She did what was best for her. Portman has absorbed the first part of Hillel’s saying, “If I am not for myself, then who will be for me?”