Most pundits have focused on the fact that Israel will no longer enjoy freedom of the skies over Syria. Fewer have pointed out it could also complicate Israel’s ability to destroy tens of thousands of Hezbollah missiles arrayed against it in the event of war. Hezbollah has long been an ally of the Assad family. Hezbollah fought to preserve Syrian President Bashar al-Assad’s rule. Syria will surely return the favor, extending  S-300 protection to Hezbollah’s arsenal.

The problem of dealing with these missiles becomes more acute as they become more precise. Prime Minister Netanyahu noted in his U.N. speech yesterday that Hezbollah’s newest precision missiles have the ability to strike within 10 meters of their target.  Israel’s military released satellite photos timed with Netanyahu’s speech showing the locations of some of Hezbollah’s underground precision-missile factories near Beirut’s international airport. 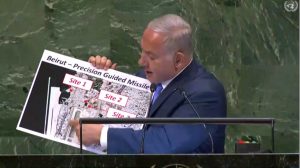 Former Israeli National Security Advisor Maj. Gen. (res.) Yaacov Amidror once asked U.N. Secretary General Ban Ki-Moon: “These missiles will be launched into Tel Aviv, Jerusalem, Haifa, Afula, everywhere. What is your advice to Israel? And I’m telling you if we will hit these missiles, many Lebanese will be killed. Many of them even don’t know that they are neighboring a missile and are totally innocent. You are the secretary-general of the United Nations. What is your advice?” According to the report in which this quote appeared, Ban Ki-Moon had no answer.

At the time, Amidror was assuming Lebanon and its civilian population would bear the brunt of the fighting (he puts the probability of an Israel-Hezbollah war as “very high”). How will the S-300 impact the equation? With precision-guided missiles in the mix, how many key sites in Israel will be hit before the IDF neutralizes those missiles?

Israel’s air force is reportedly training to deal with the S-300. The military must have a healthy respect for it given the outcry Israel made over Russia’s plan to sell it to Iran. Now Israel must contend with the S-300 right on its border. (Russia is also setting up the more advanced S-400 in Northwest Syria to protect its own forces.)

Russia could not have become more hostile more quickly. The close ties Israel took pains to foster with the Kremlin have seemingly gone up in smoke. Although Syria shot down the Russian Ilyushin reconnaissance plane, Russia laid the blame squarely on Israel, calling it “extremely ungrateful.” Few believe Russia’s version of events. An IDF delegation that visited Russia and provided a step-by-step breakdown of the incident seemed to have had little effect on Russia’s sudden belligerence.

Russia’s behavior may have been inevitable. Russia tolerated Israel’s aerial supremacy as long as the Syrian rebels were undefeated. That mission accomplished, Russia now turns its attention to securing Syrian air space for its ally Assad. The downing of the Ilyushin provided the first convenient pretext.

The question is: Will Israel risk further altercations with Russia to do what must be done — drive Iran from Syria and destroy the Iranian arms convoys carrying the equipment to Hezbollah to build those precision-guided missiles.