A week ago marked the 45th anniversary of the Yom Kippur War, when Egypt and Jordan launched a simultaneous attack on Israel in 1973 (Jordan would join later). The war lasted from Oct. 6-25 and Israel, initially beaten back, regained its footing and decisively defeated the invading Arab armies.

The anniversary passed without any notable memorial events in Israel, although there are many lessons to learn from the war. Indeed, one Ma’ariv op-ed was titled: “In the 45 years that have passed, we haven’t learned a single lesson from the near-existential-disaster of ’73.” But if you keep an eye open, there are always lessons to be learned. This year I learned two – one secular and one religious.

A small item in Israel Hayom caught my attention last week. It was about the “Tiger” company of the 7th Brigade which fought in some of the fiercest battles of the war on the Golan, including the battle of the Valley of Tears, so named because of the number of tanks lost in that area. Tiger company however boasted an extraordinary record. It emerged with zero killed, zero wounded. It’s a statistic difficult to grasp.

Uri Segal, an IDF general in the reserves and who served as head of a platoon in Tiger company, said, “Tiger company was characterized by three things — a company leader with very high demands in regards to familiarity with the territory, uncompromising discipline and adherence to the fighting doctrine of the armor corps. We took part in the highest number of operational exercises and life-fire exercises of any other company.”

When the fateful moment struck at 1:55 pm on Oct. 6, and the Syrians invaded, Tiger company was ready. 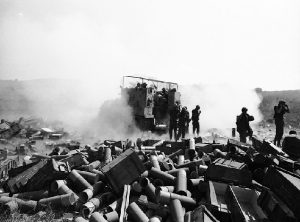 ‘Elite combat unit’ is a phrase heard a lot in Israel, and when you hear a term like that bandied about you start to wonder just how elite they are — because not everyone can be elite (especially in the “everybody gets a trophy” generation). Tiger company, however, came from a time and place where the ‘elite’ moniker wasn’t thrown around and ribbons weren’t handed out like Dixie cups. It was just a standard company of the armored corps. The difference is they acted elite and became that way.

Today, Segel visits young IDF soldiers to try and pass along the company’s combat legacy. He isn’t sure they get it. “To my sorrow, I go around among the soldiers and although they absorb the material, I’m not sure the legacy gets passed on.” He says the technology nowadays is amazing but something’s missing. “They’re lacking the foundation.”

My secular takeaway, and the Boy Scout’s motto, “Be Prepared.”

A lesson of a more religious turn comes from the following video of Effie Eitam describing his experience in the Yom Kippur War. The video is a few years old but I came across it only a few days ago. Eitam served in the Yom Kippur War as an infantry officer.  After watching this segment, you’ll understand why Eitam, who was raised a secular Jew on a kibbutz, became religious.

I don’t want to say too much about the video so as not to spoil the story. But if you don’t know about Eitam and the little bird that landed on his shoulder in a Syrian bunker, then you ought to watch this video. You won’t regret it.

The takeaway: “There are more things in heaven and earth, Horatio.”

If you want to learn more about the Yom Kippur War, I recommend two books, both written by Haifa University Professor Uri Bar-Joseph, The Watchman Fell Asleep and The Angel. You can see my review of the The Angel here. The book has been turned into a a film now available on Netflix.

Lara Alqasem Wipes Mat With Israel, But Not Without Help